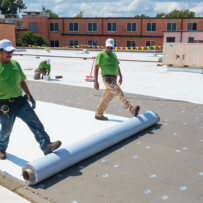 Cool Roofs? No, it’s not a spinoff of MTV Cribs or a new series on HGTV! Rather, it is a term that refers to roofs that have both a high-solar reflectance (SR) and high-thermal emittance.

If a roof has a high‑thermal emittance, it means that the roofing material does not retain a great deal of heat. A high SR means most of the sun’s rays are sufficiently reflected off the surface of the roof. Why is this important? The U.S. Department of Energy (DOE) states on their website that while a conventional roof can reach 150°F or more on a summer day, a “cool roof” can be more than 50°F cooler! Furthermore, the DOE reports that having a “cool roof” can translate into a 10 to 15% energy savings. So equipping a building with a cool roof enables lower energy consumption, lower cooling-related expenses, and possibly greater comfort to building occupants. Plus, reducing a building’s power consumption can benefit the environment by lowering the amount of air pollutants emitted by power plants such as harmful greenhouse gases like carbon dioxide (CO2).

The well-respected Lawrence Berkeley National Laboratory has been studying cool roof technology for a number of years. They say that cool roof technology can also have an impact in reducing the Urban Heat Island phenomena where the temperature in city centers can be 2 to 5°F warmer than surrounding areas. These are all great selling points to help convince your customer that a GenFlex cool roof is the way to go.

If you are in Arizona, New Mexico, or Nevada it is obvious that a cool roof is the roof of choice. But what if your business services a colder climate area? Will having a cooler roof mean greater heating costs in the winter? The short answer is yes. But surprisingly, this “winter heating penalty” is more than offset for most of the U.S. (except for the very northern central states such as Minnesota, North Dakota and South Dakota, and also parts of Alaska and Maine) by summer cooling savings, according to Lawrence Berkeley National Laboratory.

Need another reason why you should choose a cool roof? There are also rebates and incentives that are offered by utilities and state/local agencies. We have included links at the end of this article to help you locate these savings.

To view all of our TPO Products, visit /products/tpo.