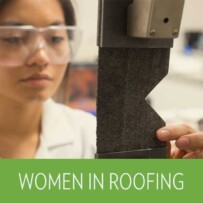 Since August is a month that, among other things, honors women with National Women’s Equality Day, GenFlex would like to applaud women who have chosen a career in construction and roofing.  Saying that women have come a long way in the construction industry is the absolute truth.

Annie McEvoy writes in her article, The history of women in the construction industry, and how far they have come, “One of the first documented women in construction was in the late 1800s.  Emily Roebling stepped in as the ‘first woman field engineer’ and saw out the completion of the Brooklyn Bridge but only because her husband had become ill. The Brooklyn Bridge opened on May 24, 1883, and Emily was the first to cross it. Louise Blanchard Bethune was the first American woman who is acknowledged to have worked as a professional architect. Born in 1856, she lived and worked primarily in Buffalo, New York, where she partnered with her husband at Bethune, Bethune & Fuchs.”

However, the act that made employment in the construction industry more accessible for women was the Civil Rights Act of 1964.  Title VII of the Civil Rights Act of 1964 prohibited employment discrimination based on race, color, religion, sex or national origin. In 1965, President Johnson issued an executive order that required contractors who held federal or federally assisted contracts to hire minorities and later amended it to also prohibit gender discrimination.

According to a National Women’s Law Center article published in 2014, “Women in Construction,” there are about 7.6 million male construction workers and about 200,000 women in the field. Meanwhile, over the past 45 years, occupational gender segregation in many other professional jobs has faded.

Leticia Elias, owner of Elias Commercial Roof Systems, is just one example of a woman who has been extremely successful in the roofing industry, but she admits it has not been easy. She worked for almost 30 years to master her profession as a roofer in the Houston, Texas area, where she learned the trade by working along-side her father. She has worked at every phase of the business and has served on the Board of Industry and Community Organizations. “It took years for me to prove my qualifications as an installer. In the beginning, I would have to work really hard to overcome the industry’s stereotypes. My greatest challenge today is maintaining a steady business growth…. Opening and maintaining lines of communication in this male-dominated industry requires hard work and persistence,” says Elias.

It is clear that women have come a long way in the construction industry since the 1880s, but some may say 2.6% is still considered a relatively low number. GenFlex Roofing Systems is proud to be a part of an organization with a gender ratio of 25% full-time female and 75% full-time male, and we encourage women to take advantage of the many opportunities in our industry and organization. To see a list of employment opportunities at GenFlex, click here.